Kim Kardashian is furious over a claim that she is cheating on her fiancé Kris Humphries — and the reality star may sue if the story goes to press! 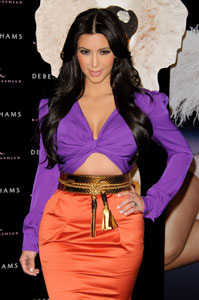 Is Kim Kardashian already cheating on her fiancé Kris Humphries? A cover story ready to go to press in the next issue of InTouch says yes, but the newly-engaged Kim says no way.

InTouch claims to have intercepted texts between Kardashian and NFL player Bret Lockett, who seems to have actively participated in the story — but Kim says not a chance.

“This is absolutely not true,” Kim told E! News. “I have no idea who this person is.”

Kim blogged her disgust this morning. “I knew when I got engaged that rumors and false stories were going to start, but this is RIDICULOUS!!!!” she wrote.

“This guy should be ashamed of himself. Calling up a magazine and making up an entirely fake story in a sad attempt to ruin my relationship!?!?! It’s just shameful and this guy should feel ashamed and humiliated. Is this your pathetic attempt for attention?”

“I’ll be damned if anyone, especially some loser I’ve never even met, is going to try to come between Kris and me… The tabloids and weekly magazines will do ANYTHING to sell copies, and in this case they decided to run a false story, knowing they had absolutely no proof that it was real. It’s disgusting, and I will be taking legal action against InTouch magazine and Bret Lockett.”

Since Kim Kardashian is photographed almost 24 hours a day, every day — including her own marriage proposal — chances are if there were any truth to this story the pics would have found their way into the fray already.