Garrett Hedlund can add another award to his growing cache. Who was there to present him with the honor? 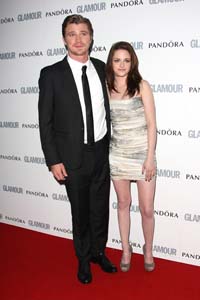 Hedlund was in London Tuesday night to accept the U.K. Glamour Man of the Year award from his On the Road co-star, Kristen Stewart.

“I met him in a movie called On the Road, and it was the greatest experience… I can verify that he’s definitely the man,” a Balmain-clad Stewart said of Hedlund.

Hedlund had a few kind words to say about his co-star, too.

“Kristen’s such a phenomenal person. To go on the whole journey in On the Road like we had been on and to experience the things we got to experience was really special.”

The Country Strong hottie wasn’t the only winner of the night — Kim Kardashian won Entrepreneur of the Year.

“What an honor!” Kardashian tweeted after her win.

Afterward, both Hedlund and Stewart (in another Balmain mini) were all smiles at the post-awards party. Next up, the pair will hit the promo circuit to promote the film, scheduled for release later this year.

Should Robert Pattinson be worried now?

Do you think Garrett Hedlund is the Man of the Year?