In honor of Sir Paul McCartney’s 69th birthday, PETA (People for the Ethical Treatment of Animals) and Paul want you to give up your burger, put down your steak and chuck your chicken and go vegetarian for one day. McCartney embraced the vegetarian lifestyle many years ago with his wife Linda, and together they became rock and roll forerunners in a healthier lifestyle movement. McCartney has been a vegetarian for over 40 years, and encourages everyone to think consciously about their food for one day. 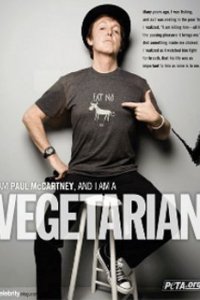 In honor of Paul McCartney’s birthday on June 18, 2011, his 69th, he is asking his fans and those who are curious about the vegetarian lifestyle to go meatless for one day. It is called Meat Free Monday, and it aims to reduce climate change by encouraging others to leave meat off their plates at least one day a week.

Said Paul, “I think many of us feel helpless in the face of environmental challenges, and it can be hard to know how to sort through the advice about what we can do to make a meaningful contribution to a cleaner, more sustainable, healthier world.”

“Having one designated meat free day a week is actually a meaningful change that everyone can make, that goes to the heart of several important, political, environmental and ethical issues all at once.”

McCartney’s oft-repeated story of his convert to vegetarianism goes as such, “We were eating roast lamb for Sunday lunch and it was the lambing season and there were all these beautiful little lambs around. Then we just looked at the lamb on our plate and looked at them outside again and thought, ‘We’re eating one of those little things that is gaily running around outside.’ It just struck us, and we said, ‘Wait a minute, maybe we don’t want to do this.'”

“Gradually, Linda started to fill the hole in the middle of the plate with spaghetti or a bit of quiche, then egg dishes and cheese pies and it started to get really good and tasty. Plus, I brought in a lot of the English stuff, mashed potatoes and rice pudding. We never noticed not having meat.”