Jon Stewart has a Weiner injury. The host of The Daily Show sliced his wrist while taping a skit on Weinergate! 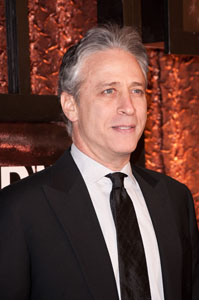 The Daily Show has been having a ball with Weinergate: The Anthony Weiner Twitter photo scandal. (In case you’ve been living under a rock, the meat of the story is that Congressman Weiner was busted sending photos of his junior senator to multiple women on Twitter.) Now Jon Stewart actually has a Weiner injury — the host of The Daily Show accidentally sliced his wrist while filming a Weiner skit.

Stewart was filming a skit mocking Weiner’s tearful press conference confession when the incident occurred. The funnyman broke a glass while mixing a batch of margaritas, slicing his wrist.

“That’s not good,” Stewart said while holding up the broken margarita glass and laughing. “I’m probably gonna have to go to the hospital!”

But the show must go on, and like a true professional Stewart stuck it out and finished the skit. After a commercial break he returned to his anchor desk, sporting a bandage.

Stewart has been stuck between a rock and a hard place on the Weiner scandal. While he has admirably covered the funniest story of the month, even while expressing his own discomfort, Stewart has known Weiner since college.