Meredith Vieira said a tearful goodbye to Today with a highlight reel covering her five years behind the desk. 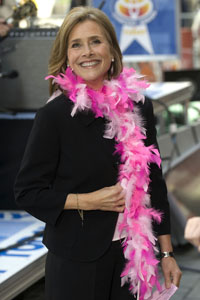 Meredith Vieira bade a tearful goodbye to fans and crew of Today after spending five years ushering in the morning for America.

A tearful Vieira said that leaving the show was “a hard decision, but the right decision.”

“I love you all very much,” she told her colleagues.

And those colleagues had nothing but accolades for Vieira. Al Roker said he never worked with anyone who was “more about the program,” while Ann Curry said Vieira’s tough decision was a shining example of how “to live our values.”

The only reason Vieira has given for leaving is to spend more time with her family. Her husband has struggled with multiple sclerosis and cancer. Read SheKnows’ top five reasons for Meredith Vieira leaving Today.

The anchor’s good pal Matt Lauer, who has seen partners come and go while he remains behind the desk, said, “If I really tell you how I feel, I’m going to turn into a blubbering idiot.”

“I marvel, with a talent as large as yours, how small your ego is.”

Ann Curry will take the seat beside Lauer next.