It’s an international breakup for Jersey Shore star Snooki and boyfriend Jionni LaValle. After nearly an entire eight months together the pair have fallen out of amore. 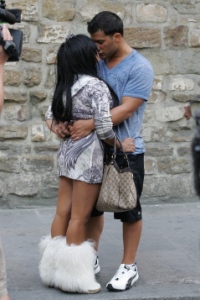 Snooki’s boyfriend Jionni LaValle recently paid a visit to Italy where his main guidette is filming with her Jersey Shore season four castmates. Snooki and Jionni were photographed on the streets of Italy hugging and kissing as recently as June 3, but an insider now says the pair are no more.

“They broke up,” an insider tells Us Weekly. Things got so bad during 23-year-old Jionni’s time visiting the Jersey Shore cast in Italy that according to the insider, “[He] came home early.”

A second source commented on Snooki and Jionni’s relationship saying, “She wasn’t sure about him at first and kept asking her friends what they thought of him. She was hesitant because he isn’t the typical gorilla.”

Word has it that the pint-sized Jersey Shore star was planning to go house hunting for a place down the street from where Jionni’s parents live. SheKnows reached out to Snooki’s rep to confirm the breakup, but calls were not immediately returned.

Now that Snooki is single, perhaps there is still time for her to sneak in a little international romance? Let’s just hope any future dates are wise enough not to let Snooki take on driving duty!