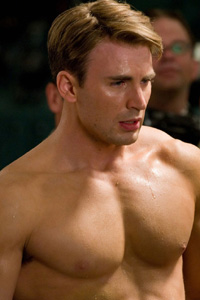 Captain America star Chris Evans has found himself in a hairy position — as in he confessed he’s going bald! The actor has signed up for three Captain America movies and three Avengers films and worries that his receding hairline may not be good for his superhero status.

“I have no problem saying this, but I’m losing my hair,” he told E Online at the MTV Movie Awards.

“The fear is this [role] can span 10 years so I can be doing this character until I’m 40,” he said. “I’m supposed to be like this superior human. He can’t be balding. How horrible would it be if this superior man has male pattern baldness?”

I’ve seen the trailer for Captain America and I’m pretty sure no one is looking at his hair — and his hair looks pretty thick in the movie photos!

He says he works out every day to get his buff bod. “It’s a lot more than I’d like it to be, but you know, if I miss three or four days, I feel like [expletive].”

Evans isn’t the first guy in the spotlight to talk about his receding hairline. Manchester United’s Wayne Rooney, 25, confided to his Twitter followers that he was losing his hair — and then posted pictures after he had his hair transplant!

“I was going bald at 25, why not? I’m delighted with the result,” he said, with a picture showing his hair plugs. He even has a Twitter hashtag, #hairwego, to follow his hair growth progress!