SheKnows caught up with the gorgeous Ali Landry last week and the expectant mother filled us in on all the details of her second pregnancy. But unlike most stories of an easier ride the second go around, Landry told us unfortunately this time was worse than the first.

Ali Landry was all smiles at the Kari Feinstein MTV Movie Awards Style Lounge last week, but the model/actress told SheKnows this was not the case for the first few months of her current pregnancy. 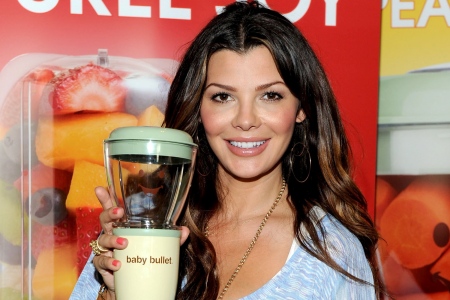 “I was definitely more nauseous the first few months and I gained a little more weight,” said Ali, comparing the experience to her first pregnancy with three-year-old daughter Estela.

Ali credits a combination of bad diet and a lack of energy as the culprits.

“All I would eat is carbs,” Landry told SheKnows. “I was having a sandwich everyday and eating rice.”

But now that she’s well into her second pregnancy, things are getting better.

“Now I’m back to my normal eating habits and it’s starting to come off,” said Landry.

And having fellow future mommy Selma Blair by her side as a workout buddy has also been a big help.

“I train with Selma Blair three to four times a week, and we do a pregnancy workout that we love,” Ali told SheKnows.

Ali added that she, Selma and Tori Spelling are all due around the same time, and they will definitely be scheduling play dates in the future!

As for the sex of the baby, Ali said she has a feeling but doesn’t know for sure just yet.

“It would be easy with a girl so I could give her Estela’s hand-me-downs,” said Landry.

And how is little Estela taking the news of a newcomer?