The son of Nicolas Cage has been hospitalized after attacking his trainer in a Hollywood restaurant. 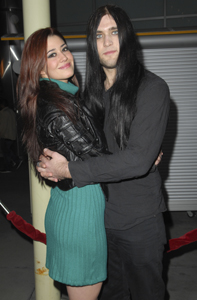 The son of Nicolas Cage is under psychiatric evaluation after he tried to attack his trainer at a Hollywood restaurant.

Weston Cage was at the Farmer’s Kitchen when his trainer told him he could not order something from the menu. Weston completely lost it — like you do when you’re on a diet and crave something you can’t have — and began pushing his trainer violently. At one point witnesses say Weston even tried to lay a roundhouse kick on the guy Chuck Norris-style!

When the cops showed up they strapped the 20-year-old to a gurney because he was still so out of control.

Weston was transported to a local hospital where he is undergoing a psychiatric evaluation and may be placed under the old nemesis of Britney Spears: The 5150 hold.

SheKnows is awaiting confirmation on the incident from Nicolas Cage’s reps.