Michelle Williams has been seen hanging out with a young director, and this isn’t the first director she’s dated. Now that she’s moved on from Spike Jonze, she’s found someone not so famous. 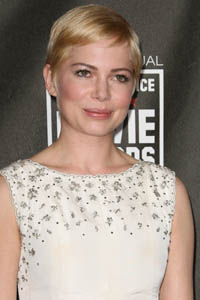 It looks like Michelle Williams has a new boyfriend, and, like one of her famous exes, he’s a director.

Williams has been sighted with Cary Fukunaga, a 33-year-old Japanese-Swedish director, screenwriter and cinematographer who, like the Dawson’s Creek alum, lives in New York City.

Williams’ rep is refusing to confirm or deny if Williams and Fukunaga are a couple, but they’ve been photographed in Williams’ Brooklyn neighborhood with Fukunaga’s arm around her waist. Sounds like they’re dating to us.

Williams has dated a slew of famous men, most recently director Spike Jonze, who was rumored to be attempting to woo her back as of late. Before that, she was rumored to be dating her Blue Valentine co-star, Ryan Gosling, but both actors denied they were romantically linked. Williams met her former fiance Heath Ledger on the set of Brokeback Mountain, and in 2005, Williams gave birth to their daughter, Matilda. At the time of Ledger’s death from an accidental overdose, the two had split.

After taking some time off from her acting work to devote herself to single motherhood, Williams returned to acting. Most recently, she talked about moving away from the dark roles she has become famous for playing and signed on to play the role of Glinda the Good Witch in Oz: The Great and Powerful.