Dancing With the Stars pro Karina Smirnoff is planning on marrying baseball player Brad Penny next January — and she has certain requirements for her wedding dress. Get all the wedding details here! 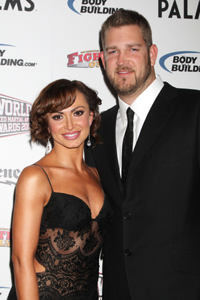 Karina Smirnoff says she is still searching for “the one” (wedding dress, that is), but reveals she has narrowed down her search to dresses with a train.

“I’m very open to the colors, the setting, the flowers. I’m very easy,” she told People. “The only thing I do want is that big dress with the train. Even if it’s just me walking in a dress, I’m all good.”

In fact, the 33-year-old Dancing With the Stars pro has narrowed down her search. “We’re down to six, which is better than 20. You always have to look at the glass half full.”

Smirnoff plans on marrying Brad Penny, who plays baseball for the Detroit Tigers, on January 21, 2012. She says it will be a “destination wedding” someplace in the Caribbean.

“I have a lot of family and friends that live in Europe and Israel, and Brad has a big family in Oklahoma,” she said. “It’s going to be a very diverse, colorful crowd.”

Smirnoff, who competed with Ralph Macchio in this season’s Dancing With the Stars, was engaged to fellow DWTS pro Maksim Chmerkovskiy before ending their relationship. She and Penny began dating in October 2009 and got engaged last October.