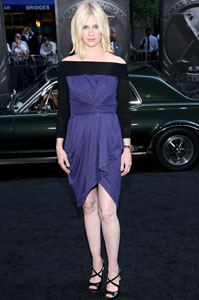 January Jones just can’t catch a break lately. Between rampant speculation over who might be her baby daddy (it isn’t Jason Sudeikis) and Zach Galifianakis exposing what a snot she can be, the last thing she needs is more bad PR right when her new flick X-Men: First Class is hitting theaters.

But that is exactly what she’s getting. This time it’s her acting ability that’s taking the hit. Lost co-creator Damon Lindelof is no fan of the actress either, and went on Twitter to tell the world how he thinks she can’t act.

Wow, so he won’t be casting her in the next Star Trek sequel then?

Lindelof does have a conscience, though. This morning he tweeted, “I need to stop saying mean things on Twitter. #MORNINGAFTER”

Tell us: Is Damon Lindelof mean, accurate or both?