Khloe Kardashian had a major wardrobe malfunction this morning when her nipple was exposed through her sheer blouse for a full six minutes on Fox and Friends. Was it an accidental slip-up — or a publicity stunt?

Khloe Kardashian and her sister Kourtney appeared on Fox and Friends to discuss the new season of Keeping Up with the Kardashians — and she revealed a lot more than she intended. Or did she? 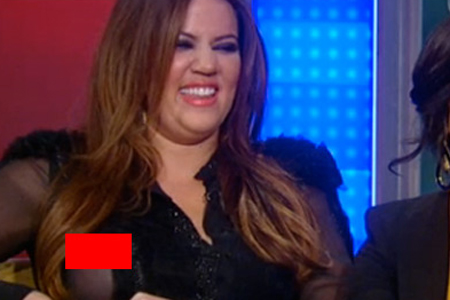 Her black Givenchy top was solid black in the middle, but sheer on the sides. As she talked about her lack of privacy and pondered over what else she could do on camera (referring to the bikini wax episode), her nipple was clearly seen for a full six minutes. Oops!

“My mom just called me saying my nip slip is ‘all over the internet!’ Ha!” Khloe tweeted. “Is it weird that I love it?! Who knew nipples were so special?”

Khloe also posted a statement on her blog, saying: “As I’m sure you’ve all heard (or seen), I had a bit of a nip slip this morning on Fox & Friends! Whoops!!! My stylist Monica Rose DID tell me to wear a bra with that sheer top but being the naughty girl that I am I disobeyed and went bra-less. I have a nipple obsession and personally love when women show their nipples — perhaps I was a member of a nudist colony in my last life.”

She goes on to write that she is “very sorry” to those she offended. “It truly was an accident, but I would be lying if I said I thought this was a big deal. I love how free European women are when it comes to nudity — they embrace their bodies and are proud of what God gave them. I love that mindset and way of life, which is why I am not embarrassed about what happened this morning. We ALL have nipples!”

Tell us: Do you think Khloe’s nip slip was accidental — or a publicity stunt? (It got us talking!)

Watch Khloe wearing the same shirt during her Today show interview (although no nip slip here!):