Kate Hudson celebrated the impending birth of her second child with a baby shower attended by 60 of her closest celebrity friends! 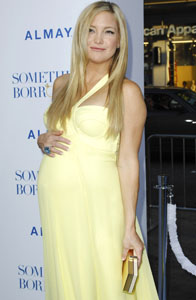 Kate Hudson is pregnant with baby number two, and to celebrate, her celebrity pals threw her a star-studded baby shower!

Jen Meyer — wife of Spider-Man actor Tobey Maguire — and 90210 actress Sara Foster hosted the bash, which was held in a private home in the same neighborhood where Mel Gibson, Olivia Newton-John and Camille Grammer all reside.

Courteney Cox, Nicole Richie and Rachel Zoe were among the 60-ish guests, and yes, kids were invited.

“It was a family-friendly party with kids of all ages running around,” a source told Us Weekly. “Nicole Richie was there with her kids and they were having a great time playing outside.” And yes, they partook in the dreaded baby shower games.

“The best one was where people tried to guess what Kate and Matthew should name the baby,” the source said. “It was hilarious and got a lot of laughs out of everyone! It was such a fun party — and people stayed for hours.”

What kind of baby gifts do you get from your fabulously wealthy friends at shindigs like this? Spies say pals showed up with lots of gift baskets — but since Kate Hudson and baby daddy Matthew Bellamy are keeping mum on the gender of their child, gifts were all green and yellow while the party was decorated in both pink and blue.

This is Kate’s second child, and traditional etiquette says showers are only for a first baby, to provide expectant mamas with things they wouldn’t already have. Kate Hudson: Bucking tradition once again.

Tell us: Is a shower for a second baby like Kate Hudson had tacky or acceptable?

Kate Hudson talks Something Borrowed
Kate Hudson is engaged to her baby daddy
Kate Hudson: My pregnancy craving is sex