For Twihards the Breaking Dawn wedding is a dream come true — but for the cast and crew it was a total nightmare. 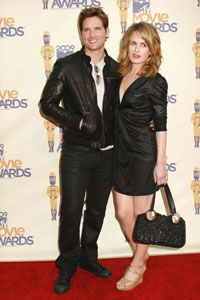 The Twilight wedding is as highly anticipated as the royal wedding — but for the cast and crew it was simply a royal mess.

Peter Facinelli, who plays father of the groom Carlisle Cullen, says it took more than a little movie magic to make the dismal day look glorious.

“I wish that I could say it was this magical beautiful day, but we had a lot of rain and it was kind of muddy and there [were] tarps all over,” Facinelli told Access Hollywood.

“Literally, there was a couple of extras where water just poured down and dumped on top of them,” continued Peter, who recently told SheKnows he loves Edward and Jacob equally. “So, it was kind of a nightmare shooting it, but [the set] was so beautifully dressed and I know that you’ll never see any of that behind the scenes stuff and it will look beautiful.”

“Very beautiful, it’s supposed to be a dream wedding. They spent months and months and months putting this thing together. It’s everything you’d want when getting married,” she explained, acknowledging the harsh weather.

“It was raining and freezing and everybody was uncomfortable, but when we were rolling, it was the most beautiful moment,” she said.