Josh Duhamel will return to the soap opera that helped start his career — All My Children. The actor will make a special appearance as the ABC show ends its 41-year run on daytime TV. 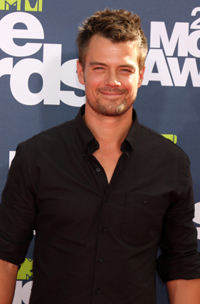 You may know hunky actor Josh Duhamel from his roles in Transformersor Las Vegas or from his high-profile marriage to the Black Eyed Peas’ Fergie — but before all of that he was con man Leo du Pres on All My Children.

Even though he was killed off on the show in 2002 after going over a waterfall while rescuing Greenlee (Rebecca Budig), his body was never found — which makes it very convenient (at least in soap opera land) for him to return to the show as his same character.

Duhamel appeared on All My Children from 1999 to 2002 and earned four Daytime Emmy nominations and won Best Supporting Actor in 2002. The 38-year-old actor will return for at least one episode.

“Everyone at All My Children is thrilled and excited to welcome Josh back to Pine Valley. The appearance of Leo is sure to be one of the highlights of the season,” said executive producer Julie Carruthers.

After 41 years on-air, All My Children will be cancelled September 2011. ABC is also cancelling the soap opera One Life to Live, with its last show running January 2012.

What other celebrities will make cameos on the final episodes of All My Children? Kelly Ripa, Melissa Leo, Sarah Michelle Gellar and Amanda Seyfried all made their start in Hollywood on this popular soap opera.

Tell us: Who else would you like to see make an appearance on All My Children?