Emma Watson is sad to hear that people think she left Brown University over bullying. To the contrary, the young Harry Potter star says everyone was wonderful… well, almost everyone. 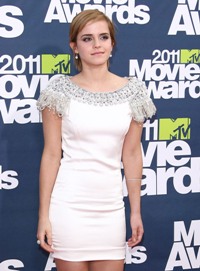 Just how big of a wuss do you think Emma Watson is? The Harry Potter star thinks she deserves a little more credit for handling what is thrown her way after years of dealing with the media. Most certainly a few supposed bullies wouldn’t be enough to make her quit school!

In regards to the rumors Emma Watson had been bullied out of Brown University, the 21-year-old told Sunday Times Style Magazine, “It made me so sad when all this stuff came out that I left Brown because I was being bullied. It made no sense at all. Brown has been the opposite.”

So just how was the young lady known as Harry Potter’s Hermione treated at school? For the most part quite well. “I’ve never even been asked for an autograph on campus,” Emma says. “I threw a party for nearly 100 students and not a single person put a photo on Facebook.”

Emma Watson continues, “Anyway, even if I was being given a hard time, I wasn’t going to wuss out of university because someone said ‘Wingardium leviosa’ to me in a corridor, or ‘Ten points for Gryffindor.’ I’ve been dealing with the media since I was nine. If I can’t stand up to a few people giving me a hard time, it’s a bit pathetic, really. I’ve had so much worse.”

So if it wasn’t bullying, why exactly did the young student drop out? “I was in denial,” Emma, who recently made her first visit to the MTV Movie Awards, said. “I wanted to pretend I wasn’t as famous as I was. I was trying to seek out normality, but I kind of have to accept who I am, the position I’m in and what happened.”

There you have it, folks. No bullies attacking Emma Watson at Brown, just a bit of an identity crisis.