Sony Pictures wants you to add more Salt to your movie diet. The studio is moving ahead with a sequel to the 2010 Angelina Jolie action flick that centered on a sleeper spy who was on the run. The film earned $294 million worldwide and they want to strike the iron while it’s hot.

Angelina Jolie’s character Evelyn Salt could be described as Jason Bourne in heels. She’s just as adventurous, just as clever and almost as dangerous. The storyline for her character was left open-ended in the first film, which means they can definitely push out a sequel. 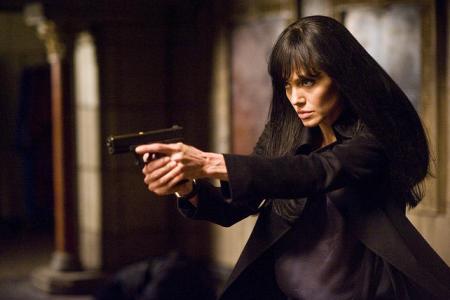 Sony has already hired Kurt Wimmer to write a draft of the screenplay, which he’s currently working on. Unlike Jolie’s previous action film Wanted, the actress has actually shown interest in reprising her role as Salt. Apparently, “Jolie wants to do the Salt sequel if it comes together right.”

In other words, she wants a good story! Those are hard to come by these days especially for a sequel. While you’re waiting on the edge of your seat for another dose of Angelina action, you should satisfy your craving with Kung Fu Panda 2. It’s not as risqué but it’s fun, has tons of energy and stars Jolie as a tiger!