Actress and reality star Brigitte Nielsen says she had an affair with Arnold Schwarzenegger while he was dating Maria Shriver. 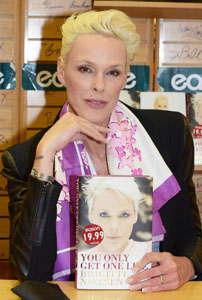 Arnold Schwarzenegger was living a double life long before he was married and had a secret love child with his housekeeper. Actress and reality star Brigitte Nielsen says she had a fling with The Sperminator while he was dating Maria Shriver.

Nielsen, who starred in the 1985 flick Red Sonja with Schwarzenegger, says their affair began and ended while filming the movie.

“Since we both knew that it wouldn’t last beyond the movie, we didn’t hold back,” Nielsen told the Daily Mail. “We wanted to try everything and so we did. There were no restrictions, no promises, nothing, and it was a great time in my life.”

“He never spoke about her — and the way he was living his life with me, I felt I was the only one,” Nielsen told the Mail. “Then I realized about him and Maria and, wow, I felt cheated. Maybe I wouldn’t have got into it if he said, ‘I’m going to marry Maria and this is dead serious,’ but he didn’t, and our affair carried on.”

Nielsen couldn’t have been very broken up about it — later that same year she met and married Sylvester Stallone.

Read on for more Arnold Schwarzenegger