American Idol runner-up Lauren Alaina has hit the Billboard charts on her first time out with her single Like My Mother Does debuting in the number nine spot! 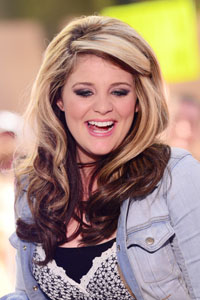 Second place isn’t such a bad thing to be when it comes to American Idol contestants. Lauren Alaina already has a hit single on the Billboard charts!

Like My Mother Does, the first single from the 16-year-old American Idol runner-up, has debuted at number nine on the Billboard Digital Albums and Country Albums charts and number 11 on the Digital Songs chart, as well as number 20 on the Hot 100 chart and 49 on the Hot Country Songs chart. This makes Alaina the highest debut for a second-place American Idol finalist in six years!

The teen couldn’t be more thrilled.

“This is so awesome!” Alaina said in a statement. “American Idol has changed my life, so I’m excited that the songs I performed on there are doing so well. I can’t believe that I have a song out on country radio, much less that so many stations started playing it right away. I can’t wait to get out and meet everybody and thank them personally for playing my song.”

Lauren Alaina heads back to the studio in Nashville later this week to record her first album. Until then, look for her as a presenter on the CMT Music Awards on Wednesday!