A pregnant Natalie Portman and father-to-be Benjamin Millepied plan to marry some day, and think that gay couples should be allowed to as well! 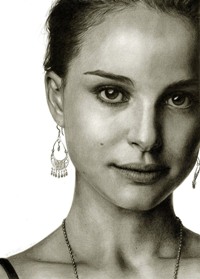 Natalie Portman is the latest famous name to sign on to the Freedom to Marry campaign, urging President Obama to support the freedom to marry for gay and lesbian couples. She and fiance Benjamin Millepied have said ‘I Do’ as a show of their support.

Evan Wolfson, President of Freedom to Marry, says, “Natalie Portman and her fiancé, Benjamin Millepied, are in love, and believe all loving couples should be able to share in the freedom to marry without discrimination. That is why they are joining the more than 100,000 people on Freedom to Marry’s Say, ‘I Do’ Open Letter calling on President Obama to do the right thing and become part of America’s majority for marriage.”

Other famous faces who have already signed on to the campaign include Ellen and Portia DeGeneres, LeAnn Rimes, Cyndi Lauper and this year’s Emmy host Jane Lynch.

Natalie Portman, pictured here in a pencil sketch by artist Randy James Atwood, has remained coy about the due date for her first child, sharing only that it is sometime this summer. The 29-year-old and Benjamin Millepied announced their engagement in December, but have yet to set a wedding date.