For Gabrielle Union, watching Rihanna’s controversial Man Down video hit too close to home for comfort. The actress, a rape victim herself who tried to kill her attacker, took to Twitter to share her thoughts after watching the video. 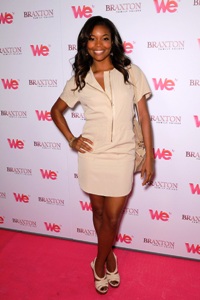 The resemblance between Rihanna’s Man Down music video and Gabrielle Union‘s real life experience with sexual assault prompted the actress to share a few words with her Twitter fans.

In 2009, Gabrielle Union opened up about being attacked and raped at her job at a shoe store 17 years earlier, in hopes of helping other victims. Despite trying to kill her own attacker, Gabrielle now urges victims to only use violence as a form of self-defense, not for revenge.

On Saturday, Gabrielle Union wrote on her official Twitter page, “Saw Man Down by Rihanna. Every victim/survivor of rape is unique, including how they Think they’d like justice to be handed out. During my rape I tried to shoot my rapist, but I missed.”

She continued, “Over the years I realized that killing my rapist would’ve added insult to injury. The Desire to kill someone who abused/raped you is understandable, but unless it’s self defense in the moment to save your life, (it) just Adds to your troubles.”

“I repeat Self Defense to save yourself/protect yourself, I’m All for. Otherwise victim/survivor taking justice into your own hands with violence equals more trouble for you!!”

So where would Gabrielle stand in the Rihanna versus the Parents Television Council standoff? We think on the side of the artist. She tweets, “[Man Down] video did a GREAT job of getting the ENTIRE world TALKING about RAPE. I hope tht it leads 2 HEALING & PREVENTS RAPE.”

The man who attacked and raped Gabrielle Union later turned himself in and is serving a 33-year prison sentence.