Faced with the difficult task of playing an actress for a film within a movie, Elle Fanning delighted in the challenge. Yet her most treasured aspect of filming Super 8, directed by J.J. Abrams and produced by Steven Spielberg, was the time spent with her onscreen filmmaking friends.

At the heart of Super 8 is a group of young teenage kids in 1979 Ohio that spend their summer making a zombie movie. The boys think they have scored a huge coup when they get the girl (Elle Fanning) who they all think is the cutest and coolest in school to star in their movie. 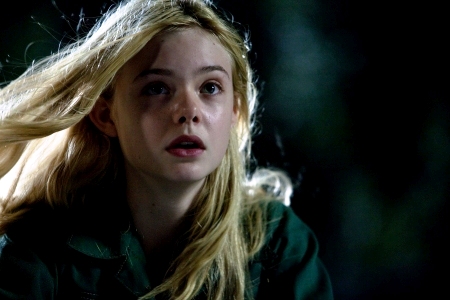 Fanning was thrilled to be a featured player in the first film collaboration of two titans — Steven Spielberg and J.J. Abrams — as well as being even remotely associated with a film that has garnered so much buzz around: What is Super 8? Super 8 (check out our early review) is equal parts thriller, sci-fi, childhood-capturing classic a la Stand By Me and also like nothing you have ever seen.

Elle Fanning may only be 13 years old, but she has already appeared in over 10 films and frequented some of TV’s biggest hits. Fanning made her film debut at the age of two opposite Sean Penn in I Am Sam and has gone on to star alongside Eddie Murphy, Jeff Bridges, Brad Pitt, Denzel Washington in the Tony Scott thriller Deja Vu and most recently with Stephen Dorff in Sofia Coppola’s Somewhere. Up next for the young starlet? Only Cameron Crowe’s latest, We Bought a Zoo, starring Matt Damon and Scarlett Johansson. Her older sister, Dakota Fanning, better watch out, Elle is nipping at her heels! 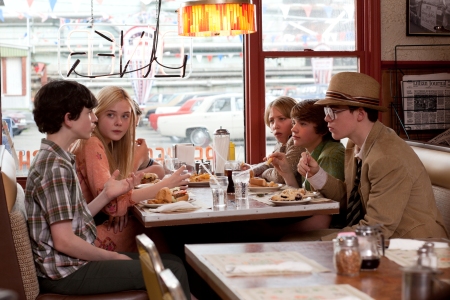 On this day at the Four Seasons Beverly Hills, Fanning’s exhilaration for being in J.J. Abrams’ Super 8 is off the charts. We have to say, she was one of our more excitable interview subjects. Rightfully so, Super 8 is super awesome.