At the tender age of 14, actress Hailee Steinfeld is set to strip down and film a sex scene for the upcoming Romeo and Juliet. The question is, are audiences ready to watch such a young actress doing such adult business? 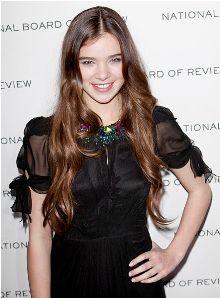 Julian Fellowes, writer of the upcoming film Romeo and Juliet starring Hailee Steinfeld, is prepared to defend his decision to have a 14-year-old bare all. While wanting an “age-appropriate actor, just like the Shakespeare originals” makes a bit of sense, the question remains if modern audiences are willing to go for it.

An excerpt of the provocative script was published in Britain’s Sunday Times on Monday. Courtesy of the Daily Mail:

“They (Romeo and Juliet) start undressing each other — slowly, gently and carefully until they are naked.

“They are eternal figures in a Raphael painting. Romeo then carries her to bed, kissing her again and again as they explore uncharted territory. Then they make love, transported into each other’s soul.”

Fellowes continues, “I wanted Hailee because she is the perfect age. Juliet is at that stage of… what you might call a child/woman. Just like Hailee herself is. My version is a romantic story — one that keeps pretty true to Shakespeare but is, I hope, more accessible.”

Hailee Steinfeld, best known for her role in True Grit, has been officially cast as Juliet but no word yet on who will play her Romeo. We can’t help but wonder if it will be an equally young star, or someone older? Which would be better?!

What do you think of young Hailee Steinfeld’s Romeo and Juliet role?