Chatter about where Katie Couric would land next has been nonstop since she announced her exit from CBS Evening News. ABC/Disney has officially won the battle! ABC has lured Couric over to create her own, syndicated daytime talk show, with an eye on premiering September 2012 in The Oprah Winfrey Show‘s old time slot. Former NBC chief Jeff Zucker is signed on to exec produce the as-yet-unnamed talk show alongside Couric. 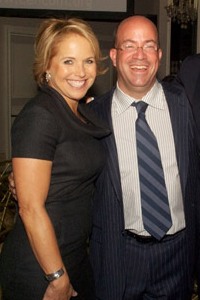 “I’m so excited to join the @abc family,” Katie Couric tweeted this morning, June 6, 2011. “Finally the worst kept secret is out!!”

Rumors have been flying since Couric announced she was leaving her gig as anchor and managing editor of the CBS Evening News with Katie Couric, along with her responsibility at 60 Minutes and CBS online.

The buzz that she and former Today co-host Matt Lauer would reunite was the biggest rumor floated. Ultimately, both Couric and Lauer admitted they adore each other and would love to work together again, but denied any new projects.

Now, it’s official. Couric is done with CBS and NBC, and on to ABC/Disney.

“I’m very happy to be returning to the network where I began my career as a desk assistant in 1979,” Couric said. “It is tremendously exciting to have the creative freedom to develop my own show with Anne Sweeney, the Disney/ABC TV Group and Jeff [Zucker], and to contribute to such a vibrant, innovative news division. I can’t wait to be part of this incredibly talented, visionary team.”

In addition to hosting her new syndicated program, Couric will join the ABC News team, contributing to all programs and platforms. Beginning this summer, Couric will anchor specials, contribute interviews, participate in special events coverage and bring her many talents to bear on some of the most important and interesting stories of the day.

ABC aims to get Couric’s unnamed syndicated talk show in the daytime time slot left vacant by The Oprah Winfrey Show and has already seen some success there. The news release also promises that with All My Children and One Life to Live cancelled, the network “continues to support General Hospital and the plans to launch The Chew in September of this year and The Revolution in January 2012.”

The ABC announcement was perfectly timed to distract attention from NBC’s Today, which will say goodbye to Meredith Vieira on Wednesday.