Prince William and his new bride are moving into lavish new digs: The old home of Princess Diana! 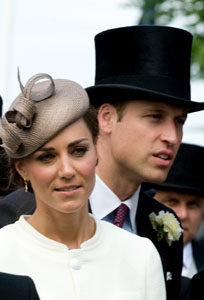 Every newlywed knows how exciting it is to find your first home as a married couple. Prince William and Kate Middleton already lived together before getting hitched, but they still need to find a place to call their very own marital abode — and it must be fit for a new princess, of course!

While the couple still plans to keep their cozy little cottage close to William’s job as a helicopter search and rescue pilot, their new abode in London will be a luxe apartment at Kensington Palace — the very place where Princes William and Harry were raised by their mother, the late Diana, Princess of Wales.

“The couple’s official London residence will temporarily become a property at Kensington Palace,” a spokesman for St. James’s Palace said.

What’s this temporarily business? The apartment they are taking on is a bit small — just two bedrooms — and with all the entertaining the couple is expected to do, that’s just not enough space.

“The property in question at Kensington Palace into which the couple are temporarily moving is small,” a spokesman said. “While it more than suffices for occasional visits to London for now, and the royal couple are very grateful for it, the Duke and Duchess are considering options for a more permanent official London residence. No suitable properties are currently available.”

Possibly up for grabs? Diana’s very own space, Kensington Palace apartments eight and nine, which are currently undergoing a nearly $20 million renovation expected to be completed next year. Just in time for Kate to hang her Duke and Duchess of Cambridge sign on the bell!