The first TV spot for Rise of the Planet of the Apes aired during the 2011 MTV Movie Awards and it featured more Tom Felton. If you’re a fan of the platinum blond baddie from Harry Potter, you’re going to love it. His hair is a bit toned down and he’s added some facial scruff but he’s still the guy we love to hate.

In Rise of the Planet of the Apes, they take on the traditional “man plays God and it backfires” story that we’ve seen so many times. The movie stars James Franco as a scientist who takes a young chimp into his home and decides to raise him as a human. This couldn’t possibly end bad — or could it? 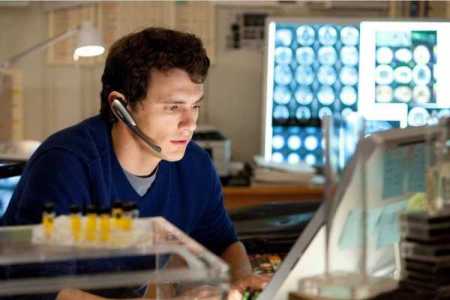 He also injects the chimp with a regenerating drug and teaches him how to read, write and essentially think like a person.

In the TV spot, we see an unsuspecting Tom Felton in the middle of monkey chaos. In one scene, an ape is sneaking up behind him and in another he’s trying to defend himself but to no avail. Where’s a wizard wand when you really need it?

We can feel the full wrath of Rise of the Planet of the Apes when it hits theaters on August 5.

Rise of the Planet of the Apes’ MTV Movie Awards clip