The Britney Spears camp is rejoicing today after a judge allowed the pop star to escape deposition in a defamation lawsuit. 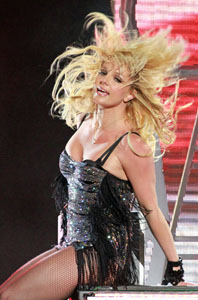 Britney Spears is being sued by her former manager Sam Lufti — the guy who was allegedly feeding her loads of pills right around the time she totally lost her marbles — for breach of contract, defamation and libel, but a judge has agreed with Spears’ lawyers that the pop star is not allowed to be deposed or appear at the trial.

Lawyers for Spears argued that since she is under a conservatorship, only the heads of that conservatorship could decide if she could be deposed or testify — and they said no way. (The main dude in charge of Britney’s conservatorship is her father, by the way.)

A letter from her legal eagles to Lufti’s team clearly shows the judge agrees Britney Spears is still too crazy for court. “While I am of course willing to engage in further dialogue with you concerning this topic, the record is clear: Plaintiff noticed Ms. Spears deposition, pursuant to the order of April 27, 2011 issued by Judge Goetz, the Co-Conservators may not produce her (Britney Spears) for deposition or trial testimony in the Lufti litigation,” the letter states.

Since they weren’t allowing Britney to be deposed, Lufti’s team filed a motion to have the star undergo an independent psychiatric evaluation to determine if she even should be under lock and key anymore. That issue has yet to be resolved.

We’re still trying to decide exactly how crazy Britney is. Obviously the woman has issues, but are they still this bad or is the conservatorship a convenient way to handle messy legal issues?

You tell us: Is Britney Spears really nuts or just crazy like a fox?