Think a pair of dining celebrities like Gordon Ramsay and Victoria Beckham would get the star treatment from a restaurant? Well, one Venice restaurant doesn’t care who the heck you are, ‘no substitutions’ means no! 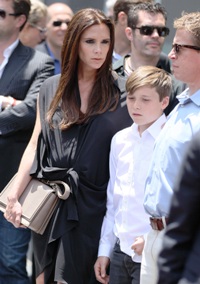 All Victoria Beckham, currently pregnant with her fourth child, wanted when she and pal Gordon Ramsay dined at Gjelina in Venice, California was the dressing on the side. Is that too much to ask?

We don’t think so, and neither does Gordon Ramsay who says he “couldn’t believe” the restaurant refused Victoria Beckham’s simple request.

“The lady’s pregnant! It was a sour note,” the MasterChef host said. “I don’t think customers should be treated that way. That might not be the way I choose to eat it, but that’s what the customer wants.”

Gordon Ramsay noted that the restaurant was great overall but added, “I don’t know, times are tough out there. You have to show a touch of sensitivity.”

This is the part of the article where the manager of the restaurant typically issues an apology for the incident, making nice with the press and offended stars. Gjelina isn’t having it!

After the L.A. Times contacted Gjelina for their side of the story, the manager responded, “So you would like to know about our ‘no substitutions’ policy?” Followed by, “It’s clearly stated on the menu. Have a nice day,” and hung up!

Was Victoria Beckham, pictured here at the end of May with son Brooklyn, out of line to put in a specific request? Or are you as shocked as Gordon Ramsay at the restaurant’s ‘No special requests for you!’ policy?