The full trailer for The Twilight Saga: Breaking Dawn Part 1 has been released — and SheKnows has it! 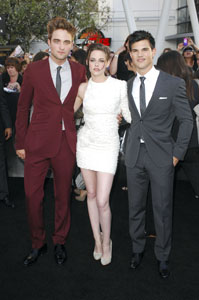 Did you catch it? The trailer for The Twilight Saga: Breaking Dawn Part 1 premiered on the MTV Movie Awards last night, and to the delight of Twihards world ’round, Edward and Bella are tying the knot!

The trailer shows the reactions of friends and family receiving their invitations to Edward and Bella’s wedding, with varying responses. One who is entirely less-than-thrilled is Jacob, who to the delight of fans everywhere reacts by ripping off his shirt. He probably runs off into the woods and transforms into a wolf or something, but we stopped caring about anything else after the shirt came off.

We did finally get the briefest glimpse of the royal vampire wedding, and it looks pretty gorgeous. The ceremony appears to be in the woods, with ropes of flowers hanging like vines from the trees. We don’t see much of Bella’s dress, except that it appears to be long-sleeved, but we do see her hair pulled halfway back with a glittering clip and her unique engagement ring as she is walked down the aisle by her father.

Oh yeah, the sex. It appears to be of the literal earth-shaking, house-falling-down variety, leading to a four-months-pregnant-looking belly the next morning. What we don’t see is Bella in the world’s grossest birth scene.

Tell us: What do you think of the trailer for The Twilight Saga: Breaking Dawn Part 1?