It’s no secret that the late Elizabeth Taylor and Richard Burton had one of, if not Hollywood’s most talked about romances. Their love wasn’t exactly what dreams were made of but it’s definitely movie-making material. Oscar-winning director Martin Scorsese wants to bring Taylor and Burton’s roller-coaster relationship to the big screen. 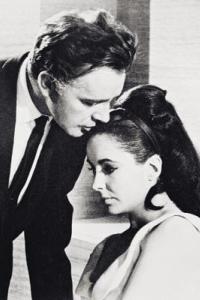 Martin Scorsese is interested in adapting the novel Furious Love by Sam Kashner and Nancy Schoenberger. It was published just last year and Paramount is already finalizing a movie deal. The director knows how to tackle old Hollywood. His acclaimed film The Aviator is proof of that.

Furious Love had been on the film circuit for a while and hadn’t really generated any interest. But when Elizabeth Taylor passed away in March it suddenly became a hot commodity. Not only has it been offered to Scorsese but Natalie Portman and The King’s Speech screenwriter David Seidler have also been courted for the project.

The film won’t be a traditional Hollywood biopic. It will specifically focus on the whirlwind romance between Taylor and Burton that began on the set of Cleopatra. The movie was a dud but it ignited a fiery relationship between the two.

Did we forget to mention they were both married when they first got together? Their relationship was even condemned by the Catholic Church. They quickly divorced their spouses and married each other, only to get divorced and marry again. Can you say drama?