Jessica Biel is apparently totally over Justin Timberlake. Now that Timberlake is rumored to be spending time with Mila Kunis and Olivia Wilde, Biel’s decided to get to know her new co-star Gerard Butler a little bit better. 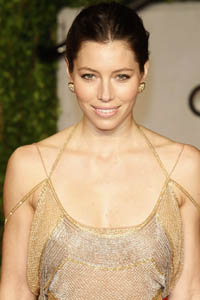 Has Jessica Biel replaced Justin Timberlake with Gerard Butler? It could be!

Shooting their new movie, Playing the Field, in Shreveport, Louisiana last month, the two stars got to know one another. Were they just hanging out together? Maybe — or maybe not.

Last weekend, Biel, 29, was spotted hanging on to Butler, 41, for dear life when the two celebs took a spin on Butler’s motorcycle along the Pacific Coast Highway. Their rep says the two are “just friends,” and the duo was described as acting “friendly and professional” while on set. But getting close on Butler’s hog sounds a little more intimate than professional.

Biel and Butler seem like something of an odd couple. Biel is more of a relationship-type while Butler is known for playing the field when it comes to women.

One onlooker, who spotted the stars dining together before shooting on the movie started, noted, “He knows he looks good,” and reports revealed Butler was eating off Biel’s plates. “If I were her, I’d hook up with him,” the witness added. “She looks good, too, and she knew she looked good, swinging her hips around.”

Perhaps Biel got tired of watching Timberlake get seen around town with starlets ranging from Mila Kunis to Olivia Wilde to Ashley Olsen. She’s so over it.

Biel and Butler — a match made in heaven or hell?