Singer Sean Kingston was gravely injured in a jet ski accident that landed him in the hospital. Now the musician is breathing on his own and back on his feet. 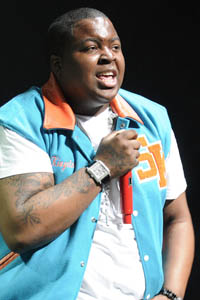 Despite having been seriously injured in a jet skiing accident a week ago, Sean Kingston is staging a comeback. Not only is he breathing without medical assistance, he’s even walking around his hospital room.

“Sean is breathing on his own and walked for the first time this morning,” his rep says, which is good because things didn’t look too good at first for Kingston, 21.

While riding his jet ski with Cassandra Sanchez, 23, on May 29 in Miami, Florida, Kingston accidentally slammed his jet ski into a low bridge, sending an injured Kingston and his female friend into the water.

“We can’t fit under there! Are we going to try and go under there? Sean stop!” Sanchez screamed moments before the Sea-Doo hit the bridge.

Kingston’s injuries include a broken jaw, a fractured wrist and water in his lungs. His life vest fell off during the accident, and he may have drowned were it not for Jonathan Rivera, an off-duty member of the Coast Guard who happened across the scene and helped Kingston to safety.

“I pushed him up, and he was vomiting what seemed like water, and then there was some blood coming out,” Rivera said.

For now, Kingston remains in a Miami hospital, although his condition has been upgraded to serious.

Kingston’s biggest hit is Beautiful Girls, and he collaborated with Justin Bieber on Eenie Meenie.