Let’s hear it for the good girls! Actress Reese Witherspoon, recipient of the Generation Award at the 2011 MTV Movie Awards, took the opportunity to use her stage time for a soapbox speech on sex tapes and reality shows.

With her MTV Movie Awards golden popcorn in hand, this year’s Generation Award winner Reese Witherspoon shared a message with the young starlets of today. “I just want to say to all the girls out there… it’s also possible to make it in Hollywood without a reality show,” said Reese. 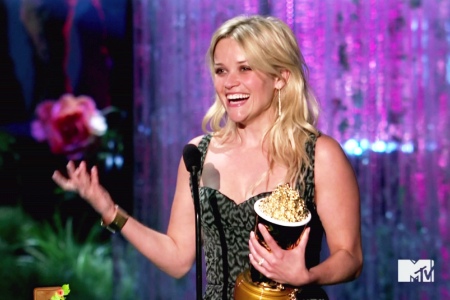 The 35-year-old continued, “When I came up in this business you made a sex tape, you were embarrassed and you hid it under your bed. And, like, if you took naked pictures of yourself on your cell phone, you hide your face [laughs]. It’s totally possible to be a good girl.”

Reese Witherspoon, mom to kids Ava, 11, and Deacon, 7, with ex-husband Ryan Phillippe concluded, “So, for all the girls out there, it’s totally possible to be a good girl. I’m going to try to make it cool.”

It’s hard to nail down just who Reese was referencing with her sex tape and reality show comments. In recent weeks Blake Lively has been the ‘victim’ of a nude photo scandal, Paris Hilton has been back in the news talking about her sex tape of years ago — and well, no one holds the reality show crown quite like the Kardashian clan.

What do you think of Reese Witherspoon ripping on young actresses of today during her MTV Movie Awards acceptance speech?