Something old, something new, something borrowed, and hurricane winds? Looks like Mother Nature could be an uninvited guest on Lily Allen’s wedding day! 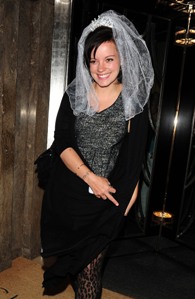 While most brides are busy facing last minute plans and nervous jitters, Lily Allen is facing down hurricane winds predicted for her wedding day. The Smile songstress is set to wed Sam Cooper this coming Saturday, June 11.

Reaching out to British weather reporter Lucy Verasamy, Lily Allen wrote on her official Twitter page, “@LucyWeather it says there are going to be winds of 275 mph in Gloucestershire this sat on Met Check, please tell me they’re lying.”

Lily Allen, seen here on May 21 while out on her ‘hen do’ in London, is planning for the wedding near her and Sam’s southwest England home. The pair began dating in 2009 and announced they were expecting their first child a year later. Six months into her pregnancy, Lily contracted a viral infection which caused her to suffer a pre-term delivery, and lose the son she was expecting.

In an attempt to reassure Lily Allen that she won’t be blown away on her wedding day, Lucy tweeted back, “It’s lies. Probs (probably) a glitch in their data feed. Charts/forecast have been changing everyday — bit early to call Saturday.”

We’ve got our fingers crossed for blue skies and sunshine on Lily Allen’s wedding day. Girl deserves the day of her dreams!