Jason Sudeikis says, “I might be a dad soon,” during the MTV Movie Awards. Does that mean he’s January Jones’ baby daddy?! SheKnows has the scoop — keep reading for the inside info. 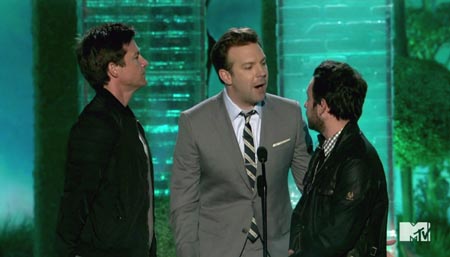 Charlie Day immediately quipped, “You said it, I’m tweeting it. You’re gonna be a dad?”

Hey, it’s not crazy to think Sudeikis might be claiming paternity. Jones’ ex Sudeikis sort of, but not really, commented on the possibility of being the dad to her baby at the White House Correspondents’ Dinner. “I’d rather — yes but no,” he confusingly replied when asked if he had a comment on the issue. “No, I…” he paused, then said, “No, I didn’t have anything [else to say].”

Despite reports that Jason Sudeikis’ comment last night on the MTV Movie Awards, “I might be a dad soon,” was in reference to January Jones’ pregnancy, Jason Sudeikis’ rep tells SheKnows.com, “It was a joke.”

Ouch! The joke’s on… we’re not sure. But at least we know Sudeikis isn’t claiming he’s the daddy.

Beyond that joke and countless others, the MTV Movie Awards were full of really funny moments — Mila Kunis and Justin Timberlake groping each other, anyone? — as well as real life news — Nikki Reed and Paul McDonald are engaged!

So, the mystery remains. Who is January Jones’ baby daddy? Do our readers have any guesses? Share them in the comments section.

See SheKnows’ own Whitney English live on the red carpet!