Just three months after they met, Nikki Reed and Paul McDonald are engaged! 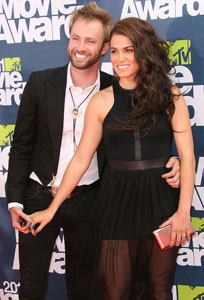 It’s a match made in Hollywood: Twilight actress Nikki Reed and American Idol contestant Paul McDonald are engaged after dating for just three months, a source confirmed to SheKnows!

Reed and McDonald broke the news on the red carpet of the MTV Movie Awards, where Reed sported some new bling on her left hand.

Reed and McDonald met on another red carpet just three months ago, and their whirlwind romance hasn’t slowed down since.

What about the haters out there who say they’re moving way too fast?

“I love him and I don’t care,” Reed told People in May.

Wonder if McDonald has seen Twilight yet?