SheKnows’ own Whitney English talked with Breaking Dawn‘s Peter Facinelli live on the MTV Movie Awards red carpet. Read on to find out his thoughts on the whole Edward vs. Jacob drama.

Who does Breaking Dawn’s Carlisle Cullen prefer for Bella Swan — his son, Edward Cullen, or hunky werewolf Jacob? Sadly, we won’t get a definitive answer to that question. SheKnows’ Whitney English did, however, try her hardest to get Cullen — aka Peter Facinelli — to dish on whether or not he’s Team Edward or Team Jacob. 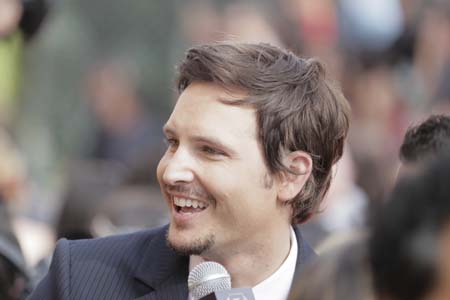 Facinelli remained diplomatic on the issue, telling SheKnows that he likes Taylor Lautner and wishes Kristen Stewart’s Bella didn’t have to choose between Edward and Jacob.

He did reveal one thing — he hoped Robert Pattinson and Stewart would win for Best Kiss (though we’re pretty sure he didn’t envision the Pattinson and Lautner kiss that happened during the show).

Facinelli isn’t the only Twilight star to remain on the fence about their Edward or Jacob preferences.

“I love the hoodies that say ‘vampires’ and ‘werewolves,’ but I refuse to get one because I can’t choose; I have to have them both. I have the Team Edward T-shirt, but I also have Team Jacob,” Twilight co-star Christian Serratos said in 2009.

“I’m sure they would both be great husbands,” Stewart told Access Hollywood after New Moon came out. “Taylor is like one of the most steady [people] — he’s really just a good guy. And then… Rob is really a more, sort of analytical, thoughtful, like wishy-washy intellectual so it depends.”

Well, let’s get real now — we all know she prefers Pattinson.

What are your thoughts on all the Breaking Dawn exclusives at the MTV Movie Awards?

See what else celebs revealed exclusively to SheKnows on the red carpet!