SheKnows was there as celebs arrived for the 2011 MTV Movie Awards. What sort of gossip did we get celebs to dish? Read on! 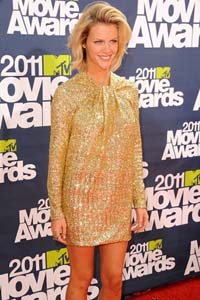 Celebs descended on the MTV Movie Awards red carpet at the Universal Studios Gibson Amphitheater in Hollywood on Sunday night. Of course, SheKnows was there taking in all of the sights and gossip of the night.

The gorgeous Brooklyn Decker stopped to give us a smile and let us know that she’s rocking a gorgeous No. 21 dress with Walter Steiger heels and a House of Lavande ring. Yeah, we’re jealous.

Gossip Girl star Jessica Szohr told us that she’s excited to be nominated for the “Scared as [Expletive]” award and that she was terrified when shooting Piranha 3D.

But what we want to know: Will she miss Gossip Girl? “Of course,” Szohr said.

The Vampire Diaries stunner Nina Dobrev told us that she’s happy to be back in LA after a good trip to Europe with rumored boyfriend Ian Somerhalder. She told us that she thinks he’s still out of town, but we bet she knows a little bit more than she’s letting on.

The Fighter sisters told us that Mark Wahlberg wants to do a sequel to the award-winning film.

“What Mark wants, Mark gets,” they said.

Horrible Bosses cutie Charlie Day said his nerves were getting the best of him.

SheKnows’ own Whitney English was LIVE on the MTV Movie Awards red carpet. Check out some of her juicy insider observations and celeb interviews!