The MTV Movie Awards are underway! Stars are arriving on the red carpet for the 2011 awards show, and we hear there’s someone who is about to get ripped on during tonight’s show!

Before SNL‘s Jason Sudekis starts his hosting duties at the 2011 MTV Movie Awards the famous and fabulous are strutting down the red carpet in Los Angeles.

Actress Alexa Vega started the MTV Movie Awards party on the ride to the event. The Spy Kids actress tweeted this pic, writing, “En route to #MtvMovieAwards … I mean rollin’!! 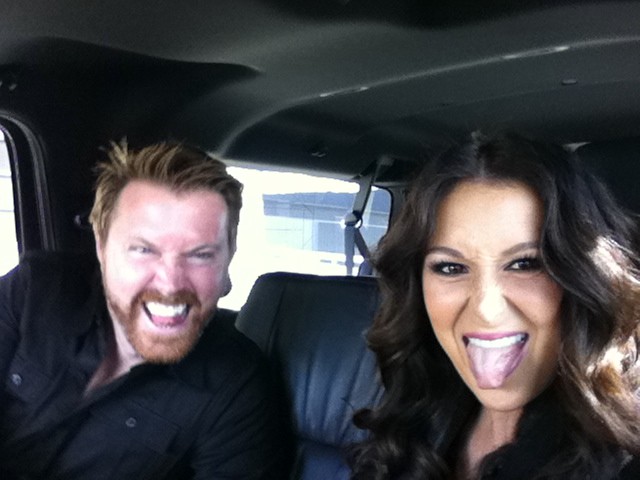 As expected, the Twilight cast caused quite a ruckus on the red carpet. MTV reports Taylor Lautner showed up wearing, “Scuffed brown boots, a black shirt open to the sternum, and grey jeans faded to drop dead unbelievable gorgeousness.” The 19-year-old commented on his recent joining of social media, saying, “It’s crazy. I’ve never done Twitter or MySpace or anything before.”

Emma Watson showed up to make her MTV Movie Awards debut. How is it that the Harry Potter star hasn’t been at the awards show until now? The Brit explains, “It’s L.A.! I’m like 8 hours away!” Emma, who wore six-inch metallic silver Brian Atwood heels also said thanks for the Twitter love to the Harry Potter fans. “Really appreciate it. “

As for who’s going to get burned tonight during the MTV Movie Awards? We hear the ‘Sperminator’ Arnold Schwarzenegger is going to be the brunt of a few jokes. Think Arnold will be tuning in? Is it wrong to hope so?!

SheKnows’ own Whitney English was LIVE on the MTV Movie Awards red carpet. Check out some of her juicy insider observations and celeb interviews!