SheKnows hit up the 2011 Guys Choice Awards on Saturday night. Check out what we saw and heard on the red carpet.

Forget the MTV Movie Awards — Saturday night was all about Spike’s 2011 Guys Choice Awards. SheKnows was on the red carpet checking out all of the hottest celebs and getting all the latest gossip. 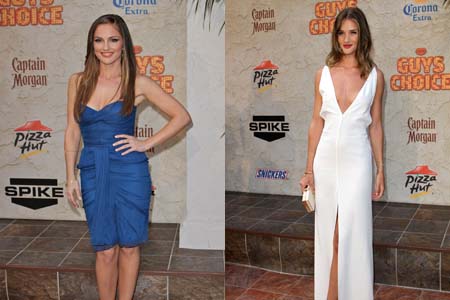 It’s Spike, so the Guys Choice Awards were all about the ladies. Mila Kunis, Rosie Huntington-Whiteley, Scarlett Johansson, Eva Mendes and Minka Kelly all arrived shortly before the show started and breezed down the red carpet, hardly stopping to talk to press.

Justin Timberlake hurried down the red carpet too, but J.T. did take some time to shout a “hello” to SheKnows as he raced by.

A Penn-less Scarlett Johansson showed up alone and told SheKnows she was very happy to be there despite the recent reports of her and beau Sean Penn’s breakup. Penn was also there to accept an award for Fast Times at Ridgemont High. Inside sources told us that Penn and Johansson didn’t interact, further proving the rumors are true. 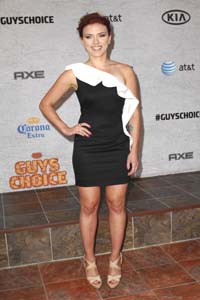 “I’m really excited to tell my grandkids someday that their grandma was once really [expletive] hot,” the Black Swan beauty laughed.

SheKnows later spotted Kunis taking a quick bathroom/makeup touch-up break just minutes before the show began (guess it does take some work being that hot). Marriage-weary star Eva Mendes, in her gorgeous purple gown, snuck in a pre-show smoke break (somebody should really tell her smoking is bad).

Decade of Hotness Award-winner Jennifer Aniston, Cameron Diaz, Harrison Ford, Robert De Niro and Penn all skipped the red carpet, though Aniston did have everyone laughing on stage.

“I will keep downward-dogging until the fat lady sings. Being this side of 40, this is not lost on me,” Aniston said of her yoga obsession.

And the movie of the night, The Fighter, brought out many of the stars from the film including Mark Wahlberg, the real Micky and Dicky Ward and “The Sisters” from the film who told SheKnows they are so proud of Mark and were rooting for him to win Kick Ass Kicker.

Check out all of the winners from the 2011 Spike Guys Choice Awards: 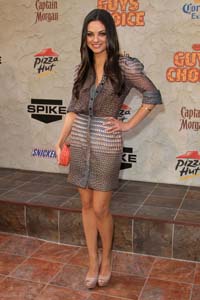 Guy of the Year: Mark Wahlberg

Guy Movie of the Year: The Fighter

Rookie of the Year: Blake Griffin

What did you think of Spike’s Guys Choice Awards?