Adele won’t be hitting the stage in the U.S. any time soon — she had to cancel the rest of her tour dates after her doctor put her on bed rest. 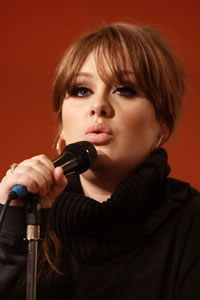 Bad news, Adele fans. The singer is Rollin’ in the Deep with a bad case of laryngitis and had to cancel the rest of her U.S. tour dates, the singer confirmed on her website.

“I’m really frustrated. I was hoping with a weeks rest I’d be better to sing again straight away. However there is absolutely nothing I can do but take the doctors advice and rest some more. I’m so sorry. See you soon, love Adele,” the singer wrote.

The big-voiced British singer previously cancelled five dates on her sold-out North American tour, but a visit to her otolaryngology specialist showed it was necessary to cancel the rest of the dates.

Fans are disappointed about the tour cancelation, though Adele’s rep said they’re looking into replacement dates ASAP. Many fans have called out the singer’s chain smoking habit as the cause of her illness.

“Maybe she should consider smoking cessation to prevent laryngitis,” one fan wrote on Twitter.

“Adele needs to quit smoking if she wants her vocals back. She’s amazing at what she does — sad she’s ruined her big chance,” another fan wrote.

Here’s hoping she’s trying to quit — her voice is too special to ruin.

Are you disappointed that Adele had to cancel her tour?