One day Trace Adkins’ mansion was a 5,000-square-foot place to call home, the next it was a smoldering heap. Thanks to a quick-thinking nanny and a family emergency plan, his three children escaped the blaze unharmed. 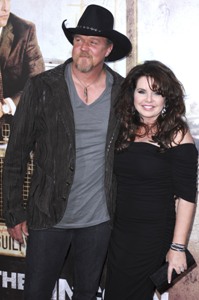 The horrific fire that destroyed the home of country singer Trace Adkins has thankfully claimed no lives. The family home of 11 years in Nashville, Tennessee is now being described as ‘a total loss.’

The trouble started Saturday afternoon while Trace Adkins’ wife Rhonda was out running errands. The couple’s three daughters and a nanny were at home with the family dog.

Upon returning home, Rhonda saw black smoke in the sky and rushed to the house. Meanwhile inside, the children and nanny heard a loud crash, which they attributed to something possibly falling out of a kitchen cabinet. When an inspection of the kitchen turned up nothing out of the ordinary, the nanny thought to check the garage.

It was there that she reportedly found the dryer turned over, with smoke and fire permeating the air. She then quickly got the children and dog out of the house and called 9-1-1.

The family had previously established a safety plan in case of emergency. The girls knew that, should there ever be a fire, they would run to a big piece of yellow tape on a tree safely away from the home.

Speaking with the Tennessean, Rhonda told reporters, “I’m just numb. I’m sad because we lost irreplaceable things, like all of Trace’s awards and our family photos.” Keeping the loss in perspective she continued, “You can replace things, not people. I’m just glad that my children are safe.”

A spokesman for Trace Adkins, who was flying to Alaska at the time of the house fire, says, “Trace wishes to express his gratitude for the immediate response of the Brentwood Fire Department and is humbled by the outpouring of concern from friends and fans.”

No word yet on a cause for the fire at Trace Adkins’ home.