SheKnows is continuing our coverage of the new ABC Family drama Switched at Birth in which two very diverse families — one wealthy, one headed by a single, working class mom — discover that their teen daughters were switched as newborns.

We’ve chatted with wealthy duo Kathryn and Bay played by Lea Thompson and Vanessa Marano in Switched at Birth. Let’s hear from single mom Regina played by George Lopez Show alum Constance Marie and switched daughter Daphne, played by newcomer Katie Leclerc, whose character is deaf due to contracting meningitis. Constance had to learn sign language in mere weeks and tells SheKnows how she was able to aid a deaf person in real life. 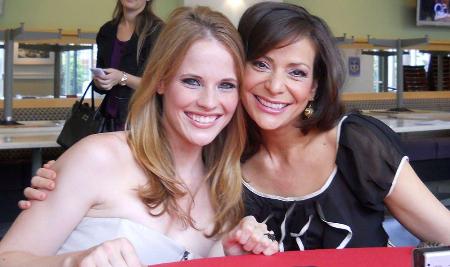 Constance & Katie Switch it up

SheKnows: We’ve heard from Lea and Vanessa about the serious drama issues in the show. The core issue is certainly serious, but do you guys lighten it up too?

Katie Leclerc: And Marlee (Matlin, in a recurring role). She’s so funny.

Constance Marie: Marlee Matlin, Academy Award-winning actress, nasty humor too. Me, I’m no stranger to comedy. I’ve done it a little bit so we throw that in there. We hit both tones with an authenticity that never feels forced so that’s a beautiful thing.

SheKnows: To clarify, your characters are now living in the guest house of the more wealthy family. Kinda awkward?

Katie Leclerc: Ya think? There’s definitely moments where the two families clash but there are very sweet moments where you really see the connection with the characters and really see they care about each other and just want everyone to be the best they can be.

Constance Marie: We get to deal with racial, social and economic differences in family and how each family is honestly trying to do the very best for their child. That’s what America does. That’s what every parent does. The crazy part that we get to see is how different that is to each family. You put two families who are completely opposite in close quarters and the drama just naturally unfolds from that.

Katie Leclerc: Even having nothing to do with the community or anything like that; just the two families individually getting along.

Constance Marie: And trying to get to know children that are theirs but not theirs. It’s such a complex question. What would you do if the child that you had raised for 15 years was suddenly deemed or labeled not yours technically but you’ve been nurturing and loving this child for so long? Just the drama from that and you add the deaf aspect to that, it’s just a smorgasbord of topics and moments.

Katie Leclerc: There is a lot of adjusting for both families to do. 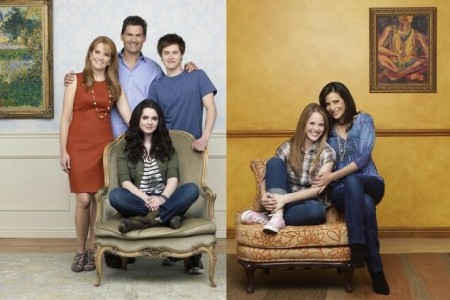 SheKnows: Did the two girls who were switched know each other in school before?

Constance Marie: Same city but completely different schools. One is wealthy and one is working class, just a high school science experiment, a DNA experiment on accident [reveals the switch].

Katie Leclerc: And you just spin the world upside down.

Constance Marie: Then there is the legal aspect. What do you do? What the writers came up with is that, instead of fighting each other, you actually get to know each other and prevent some kind of legal battle. The girls are so close to becoming adults to do whatever they want so you want to do this in the most loving way possible. Lea Thompson and myself have some amazing scenes together. We both respect and love each other because we know we are doing the best for our own daughters but we are diametrically opposed as to what we want them to do so it’s pretty amazing.

Katie Leclerc: There are a lot of strong women on the show [laughs]! 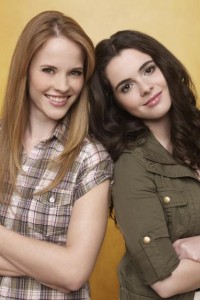 SheKnows: Constance, as a mom, did you do a lot of research on any real life versions of this problem for Switched at Birth?

Constance Marie: I am a mother of a two-year-old daughter. She was made through in vitro fertilization. She was frozen in a refrigerator far from my body. She is mine but to [think], “What if somebody had grabbed the wrong tube and if I found out she wasn’t mine after two years?” I’m not giving that kid back! I love that baby. I’ve pottie-trained that baby. That baby only knows me. So that’s enough research for me right there. Just take the leap of faith. So, I didn’t have to do research. If she’s my daughter, I’m not letting her go unless somebody legally makes me.

SheKnows: Talk about the relationship with the other daughter played by Vanessa Marano.

Katie Leclerc: And Vanessa is so funny.

Constance Marie: There’s a lot of comedy that comes from her take on everything. She’s got a cynicism and a way of looking at the world that is genius.

Katie Leclerc: Yeah. We’re very opposite people. She’s sarcastic and cynical and I’m bright and happy most of the time.

Constance Marie: Because I raised her well.

Katie Leclerc: It’s a great juxtaposition to see the two characters and their personal struggle to get along regardless of the mother thing as well.

SheKnows: Constance, Marlee has said that you have a real facility for sign language. Talk about the learning curve there.

Constance Marie: She is amazing. I had three weeks to pretend to be fluent; that I’ve been signing for 12 years which was brutal. I went to sign language boot camp and I was really blessed that I was one of the first people hired because they thought, “If we’re going to get an actress who really doesn’t know anything, we’re going to have to give her some time.” The signing has been a whole character within itself. It’s a non-stop job. I have the most buff forearm ever.

Katie Leclerc: It can bend steel.

Constance Marie: [Laughs] It’s a beautiful thing. Because I was a dancer, I understand something about the fluid movement and it is a gorgeous language.

Katie Leclerc: So beautiful and so emotional. So, just touching.

Constance Marie: And, in the USA, English is the predominant language and the second is Spanish and the third is sign language. I didn’t realize that. I have learned so much about the hearing and non-hearing world, the deaf community. It’s been a huge education.

Katie Leclerc: I think this show is a great facilitator to bridge those roles and see that the deaf community is really not that different than the hearing community. There are a lot of differences but there are a lot of common threads that tie both worlds together.

SheKnows: Constance, have you had a chance to use sign language in real life?

Constance Marie: My daughter knows 15 signs. I was amazing in my scenes but in real life it was slower. There was a man who was deaf and walking down a street where I live and people weren’t treating him well. They were wondering if he was a little bit off or crazy and they said he was writing things down and pretending to be deaf. I went outside and thought, “How can I possibly help?” I could manage to say, “Are you deaf?” And he said, “Yes.” I said, “Okay, he’s not crazy. He is actually deaf and trying to communicate something to you.” I felt horrible that that’s all I could do to help but once I established the fact that he was deaf and having trouble communicating, everybody treated him differently. I thought, “Oh my God.” I thought, “This show is going to do that on a whole new level.” All of a sudden you will see deaf people in your own walk of life that you might not have seen before and you might look at them differently and maybe learn a sign.

Katie Leclerc: Constance is doing full conversations voice off. She’s all on her own and she’s going great.

Constance Marie: I forget now. Sometimes I’ll be just signing and I’ll forget to talk. It’s so much easier to not talk and sign. I do that all the time.