Taking a page from real life, ABC Family’s new series Switched at Birth deals with two very diverse families — one wealthy, one headed by a single, working class mom — who discover that their teen daughters were switched as newborns. Their solution? Get to know each other and deal with the inevitable drama that ensues. The series premieres on the network June 6.

SheKnows is at the ABC Studios in Burbank, California to get the scoop on the show from the two “sets” of moms-daughters from Switched at Birth. First, we’re sitting down with Lea Thompson, who plays “wealthy” mom Kathryn Kennish, and Bay, the daughter she raised played by Vanessa Marano of Gilmore Girls. 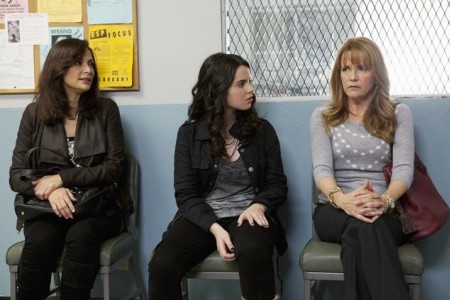 SheKnows: Lea, isn’t this your first series since the 1990s sitcom Caroline in the City?

Lea Thompson: Yeah, well, I did For the People on Lifetime for a year.

SheKnows: Why pick this series for your TV return?

Lea Thompson: I just really liked the story and I loved the fact that I have two teenage daughters. I think it’s great that there’s a place where teenage girls can go and see issues worked out. I think it’s a very, very difficult time to grow up, to be a teenage girl, with the Internet and all this kind of crazy stuff, and I’m really happy to be part of a show that’s trying to work out these issues for girls, and with amazing actresses representing them.

SheKnows: Vanessa, you are the teen who opens the whole can of worms by learning, in school, that you simply can’t be your parents’ daughter?

Vanessa Marano: Yes. My character, Bay Kennish is doing a chemistry assignment in class where all the kids are trying to find out what their blood type is. It turns out that no way scientifically she could be related to her family. This prompts her to go to a genetic counselor and they find out that she was indeed switched at birth with another girl, Daphne Vasquez, who happens to be deaf. And there’s the story.

Vanessa Marano: And in an effort for all of us to get to know each other, we decide to move into the same area.

SheKnows: How seriously did you get curious about these real life incidents that mirrored what happened on Switched at Birth? Did you do research?

Vanessa Marano: It has happened, and there have been plenty of stories, but it’s not something you can really do research on, because there’s a lot of different dynamics to it. [In our show], it’s not just switched at birth, it’s one is wealthier than the other, one’s a single parent, one is deaf, one is a rebellious teenager, one is an ex-baseball player and there’s a sibling. There are so many different points to it that you can’t really research it, because it’s so unique to those people in our story.

Lea Thompson: And what’s relatable is that there are so many different families. Say you get married and step-people have to move in with each other, and there’s the whole idea of being from completely [different environments]. Also when people are adopted now, more commonly at 18 they’re going to meet their biological parents. There are other things that we can all relate to, not just this switched at birth thing.

Lea Thompson: When your son and your daughter get married to someone else, you all of a sudden have this whole other family at the wedding. Like, “Who are these people? Why are they doing that?” [Laughter] “Oh my God, they don’t use their…” There’s all those things that happen where you’re trying to get along, but you’re from very different worlds. 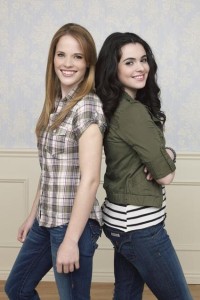 SheKnows: And the two teen girls have their own special drama, right?

Vanessa Marano: Oh yeah. A big issue for Daphne (Katie Leclerc) and Bay is “Would I have been the same person if this whole thing hadn’t happened?” So there’s been a lot of experimentation going on. Bay meets somebody from Daphne’s neighborhood and becomes romantically interested in him. Daphne meets someone from Bay’s neighborhood and becomes romantically interested in him but, it turns out he and Bay are dating. They’re trying to basically balance each other out. So if it wasn’t difficult enough that these girls share parents, they’re also now sharing boyfriends and friends and a sibling also to top it off. So there’s a huge identity crisis going on [in addition to] just figuring out who you are as a teenager. Daphne is deaf and attends a deaf school. She has a hearing mother who became fluent in sign language.

SheKnows: Lea, you and Constance Marie, who plays the other mom, must have some amazingly dramatic scenes together. That has to be great for you as an actress.

Lea Thompson: What people seem to respond to and what is really interesting is the idea of how these two mothers make it work for them. And they’re very different people. They’re from completely different backgrounds. My character thought she had it all figured out. She had her perfect little life, two children, a boy and a girl, a perfect husband and everything seemed perfect and then all of a sudden this bomb goes off in her life where she is forced to open up her mind to other things. I think my character kind of blames the other mother for the fact that the daughter’s deaf, because she got it from getting meningitis. I keep thinking that if I had raised her, she wouldn’t be deaf. I would have taken better care of her. That makes for great conflict. We’re jealous of each other, we’re defensive about our children.

Vanessa Marano: It’s a family show and it’s also a teenage girl show, and it’s a mother show, so there’s kind of a fine balance there. There’s a lot of depth to it and it’s a real story that you don’t have to add anything to. It’s very organic and natural, both the drama and the humor of it.

SheKnows: Vanessa, what is your favorite Lea Thompson movie?

Vanessa Marano: Oh my goodness gracious. I’m going to say it. It’s Back to the Future. God she doesn’t get that at all, she’s never heard that [Lea is laughing]. But we did have an actor on set who totally nerded out over Red Dawn. It was adorable.

Lea Thompson: It was really sweet. He seemed really cool and then he was like, “I loved Red Dawn. It took me two weeks to tell you that.”

SheKnows: Have you had a fan come up and you’re thinking, “Okay, they’re going to freak out about Back to the Future,” and then it’s some completely obscure movie?

Lea Thompson: All the time or Broadway. They’ll be like, “I loved you in Cabaret.” And I’ll be like, “Wow, not that many people saw that. That’s awesome.” You never know.