Has Kevin Federline’s first baby mama Shar Jackson finally forgiven Britney Spears for breaking up her relationship with the back-up dancer? It would appear so! SheKnows caught up with Jackson at an MTV Movie Awards pre-party, where she told us exclusively that she supports Brit, and may even check out her upcoming Femme Fatale tour this summer.

Shar Jackson may have had her beef with Britney Spears in the past, but it appears now that Kevin Federline is on to his next baby mama, the two former rivals can finally unite. 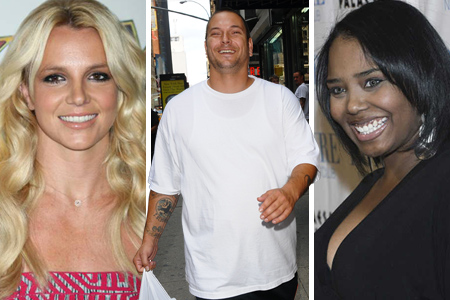 Jackson told SheKnows exclusively Friday that she took her oldest daughter Cassie (not one of her two children with K-Fed) to see Britney while she was touring for The Circus in 2009.

“Cassie went to the last one,” Shar told SheKnows at Melanie Segal’s “Prepare LA” Red Cross Trend Lounge. “She had a blast.”

And Shar says she’ll probably take her daughter to see Spears again this go around on her Femme Fatale tour with Nicki Minaj, which starts June 16th in Sacramento.

“If the kids want to go then we’ll go,” said Shar.

This sentiment is a far cry from when Jackson slammed Spears on Celebrity Rap Superstar for her infamous VMA performance singing, “They should have had me open up at the VMAs!”

But now that Kevin’s expecting a daughter with girlfriend Victoria Prince, Shar has a new adversary to set her sights on.

“I haven’t really talked to her,” Shar told SheKnows of Prince. “Hey, we’re just a growing family. It is what it is. I hope [Kevin] is well.”

The daughter with Prince will be Kevin’s fifth child. He has 5-year-old Sean Preston and 4-year-old Jayden James with Brit, and Kori, 8, and Kaleb, 6, with Shar.

So what do you guys think? Will we be seeing Britney Spears and her boys sitting down for a picnic with Shar Jackson and her kids come 4th of July? Sounds like Kevin Federline’s fairytale ending.