There aren’t a ton of brand new releases for this first weekend of June, 2011, but you’re sure to find a few juicy DVD/Blu-ray picks at Redbox, Netflix and OnDemand. True Blood: The Complete Third Season, Drive Angry and Biutiful are coming home. You can also find picks to help you prepare for Sunday’s MTV Movie Awards! 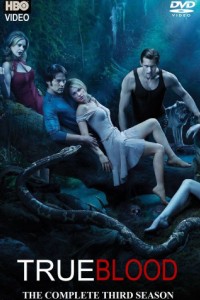 With the new season of True Blood just starting to catch some pre-season buzz, True Blood: The Complete Third Season has dropped. That may be all some readers need to hear about, but there’s more.

If you’re looking to catch up before the MTV Movie Awards on Sunday, several of the above made the nominee list, including Best Movie noms Potter, Black Swan and the Biebs. The most nominated flick, Twilight Saga: Eclipse, is already out on DVD/Blu-ray, as is Inception and The Social Network.

Serious movie lovers will want to check out Javier Bardem in Alejandro Gonzalez Inarritu’s Biutiful. Bardem earned raves and an Oscar nomination for his performance, but be warned before you rent this one: It’s not a feel-good, family movie. In fact, it’s quite the opposite. Bardem takes a sad turn in the film as a dying hustler and father of two in the gritty underworld of Barcelona. Just about every review references the film’s juxtaposition of rough and tender, crediting Bardem with delivering magic.

Nicolas Cage’s Drive Angry is another dark film, but in a very different way. The vengeful action flick is about a father who escapes from hell to chase down the men who killed his daughter and kidnapped his granddaughter.

As always, remember to check your OnDemand cable options. The rental price can’t match Redbox or Netflix, but you might find a pre-DVD release or even a movie still in theaters that’s worth the extra buck.

True Grit and Just Go With It come home June 7.

Also, in theaters this weekend: