What’s a couple to do when they’ve split up and can’t decide who their two kids should live with? Looks like Kelsey Grammer is suggesting he and ex-wife Camille Grammer split their two children up as well. 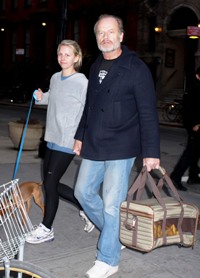 The Kelsey Grammer vs. Camille Grammer custody battle is in full swing! Both have filed for sole custody of their nine-year-old daughter Mason and six-year-old son Jude, but now it seems Kelsey has an alternative plan up his sleeve — split the kids 50/50.

Despite denial that Kelsey was trying to split up the kids, a letter sent from the actor’s lawyer to his ex-wife’s attorney has been obtained by TMZ proving otherwise. Details of Kelsey Grammer’s custody plan suggestion are outlined within the pages.

It continues, “Unless either party is out of the country, each parent shall have both children one weekend per month. The parties shall continue to… agree upon a schedule that ensures frequent and continuing contact between Mason and Kelsey, Jude and Camille, and Mason and Jude.”

Kelsey, pictured here with new wife Kayte Walsh, is reportedly pushing for the custody case to go to trial. Camille wants primary physical custody and to keep their two children from being separated.

What do you think of Kelsey Grammer’s custody plan to split the kids up?