Matt Damon spoke at a cancer fundraiser for a center where his father is undergoing treatment — and the actor says seeing his father sick just plain sucks. 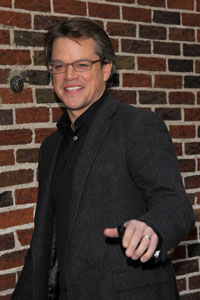 Matt Damon is giving back. The actor spoke at a fundraiser for the cancer care center where his father is undergoing treatment, and like all families touched by the disease, Damon says it sucks.

“My family is so grateful for the care you’ve given us,” Damon said at the fundraiser for Massachusetts General Hospital’s Cancer Care Center Wednesday night.

“It’s deeply humbling to see how many people here are committing their lives to helping others,” Damon said. “We’ve lost some close personal friends to cancer in recent years, but I never thought it would happen to my dad, the marathon runner… It sucked.”

The Adjustment Bureau actor’s father Kent has been undergoing treatment for the blood cancer multiple myeloma and is currently in remission.