Shamed politician John Edwards has been indicted on charges he illegally used campaign contributions to cover up his extramarital affair while running for president. 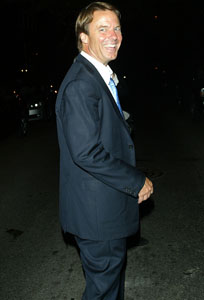 John Edwards has been indicted on charges he illegally used campaign contributions to cover up his illicit extramarital affair with Rielle Hunter while he was running for president — and his wife was dying.

A jury in North Carolina indicted Edwards on six counts, including four counts of illegal campaign contributions, one count of false statements and one count of conspiracy.

The politician’s lawyers do not deny he used hundreds of thousands of dollars to cover up his affair and secret love child with videographer Rielle Hunter, but claim the funds he used were gifts from friends, not reportable campaign contributions, and therefore his actions were not illegal.

Insiders say Edwards’ affair with Hunter began in 2006, and later that year she was given a job as a videographer for Edwards’ 2008 presidential campaign. When she became pregnant with Edwards’ child, the shady pol allegedly used campaign cash to pay aide Andrew Young to say it was his own baby.

John Edwards is due in court this afternoon to answer the charges.